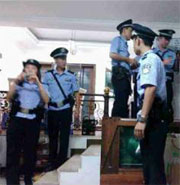 Calling on Human Right
—— His Holiness the Vairocana Xing Wu (The Advocator of “Fasting for Charity & One Good Deed Every Day”) Was Illegally Detained Again
Around 11pm, midnight of July 29th, 2014, about one hundred of armed policemen rushed into Yinshi Yayuan ( Silver Stone Garden) of Zhuhai, Guangdong Province to search the residents. >>

Since the devil cloud of 911 rose above Manhattan, this blue planet has been cloaked in a shroud of ruthless and cruel haze, and Blood and flames have begun to pervade our green homeland. Ever since, violent events have occurred frequently in many parts of the earth, clouds of smoke floating everywhere. An average of 5 violent terrorist events targeted at civilians have happened every day, and 2,000 every year. People cannot help shivering at those violent and bloody events.

Thereafter, countless happy families have been destroyed in shattering explosions, innumerable peaceful ethnic groups have begun to hate each other because of the bloody massacres, many countries have suffered turbulent social situations and depressive economies in the haze of terrorist attacks, and a great many regions have undergone fleeing refugees and sparse population in continuous violent conflicts.

Chinese civilians seemed to take “terrorist events” as exclusive news in foreign countries. But recently, increasing terrorist events have suddenly broken into the social lives of ordinary Chinese people. This ancient nation, which takes “harmony” as a priority, finally suffered brutality and terror in the events of “Kunming Railway Station”, “Guangzhou Railway Station”, “Urumqi Street Corner” and “McDonald in Zhaoyuan, Shandong Province”. It is even more pathetic that the individual security and interpersonal credit of the civilian are deteriorating gradually and group moral consciousness and social responsibility awareness are disappearing rapidly with the spread of waves of the sense of terrorist presence.

We cannot help asking, “Is it an inevitable ending of the history of human civilization? Is it the cost human beings must pay for scientific and technological progress, cultural prosperity, material abundance, common resources, political diversification, and freedom of belief?”

No! The answer is no! Any organizations using the excuse of ethnicity, culture, belief, politics, economy and territory as reasons for terrorism are the public enemies of human civilization! When terrorism intrudes and takes over the innate compassion, uprightness and bravery of human beings; when we indulge our biological instincts of “seeking benefits and avoiding disadvantages” in enslaving our conscience and duties; when benevolence and sincerity become wildest dreams; when contempt and arrogance towards social contracts from groups become commonplace, please do not ask --- for whom the bell tolls! It is up to all of us to make the correct choice!

We, human beings, have a common nature and purpose. Why can not we be bathed in sunlight and rain and enjoy a peaceful and serene sky together?

A Zenist as I am, confronted with various disharmonies in human society, I launched a global initiative for “Fasting for Charity and Good Deed Every Day” on February 11th, 2011, proposing to achieve self-redemption of mankind through fasting and doing good so as to abolish human and natural catastrophes. Since then, both domestic and overseas, understanding people spontaneously have formed millions of “F & D” groups one after another, and thousands of virtuous people have joined in the practice and dissemination of the “F & D”, constantly pouring kindness and love into society.

Through fasting, numerous people have achieved healthy lifestyles and healthy bodies, reducing resource consumption and conflicts caused by it; through charity, people have built social ethics and feelings of universal compassion and equality in their inner hearts; and the good causes of mutual aid and love have been implanted in their lives. In the three years since the start of fasting for charity, the seeds of good have taken roots, sprouted, bloomed and born fruits.

Based on promoting “F & D”, on March 10th, 2013, I sent out a call of “Mutual Love among All Citizens” campaign, i.e. “finding mutual aid, mutual love, mutual trust, self-respect, self-dignity, and self-improvement among people”. I hope this campaign can push human beings to try their best to carry forward “Equality” and “Caritas/Universal love” to every corner of the world and to remedy social deficiency and perversity through common devotion, making the future society and groups return to normal ethical and juridical orders. I would like every interested fellow to participate, to make everyone in society perfect their personalities and regularize behavior, and to construct together a society and ecological environment in which our offspring can live and develop.

In these times of frequent terrorist events, I send out the initiative of “Fasting for Charity, Good Deed Every Day” and “Mutual Love among All Citizens” to all citizens in the world, appealing to all citizens to achieve self-redemption, egoism and altruism! Let us create a harmonious social atmosphere together through everyone’s unremitting efforts, let us reconstruct a glorious human homeland our ancient oracles predicted for us!

The global network platforms are as follows, please contact us:

http://weibo.com/fcglobal?from=feed&loc=nickname
Sina Twitter of fasting for charity&Good Deed Every Day

http://weibo.com/u/2767252171?from=myfollow_group
Sina Twitter of Mutual Love among All Citizens

We sincerely invite your participation. Let’s hold up the blue sky hand in hand!

The launch of Hua Zang website dovetails with the trend of current society, and presents the real Hua Zang, which shows the heavens’ intent to relieve all sentient beings from suffering, and meet the will of human beings on earth to achieve a prosperous age with harmony. It is a convenient Dharma-Gate that Buddha opens to all, and provides a place for Buddhist practicers to attain enlightenment.
Hua Zang Center upholds the spirit of Hua Zang Lineage with the commitment to the prosperity of the Chinese nation and the world peace. It infuses a pure flux into the defiled world, sets up moral examples, and corrects practicers' errors to free them from impediments, thus to open a spectacular door of attaining enlightenment.
Wish all Hua Zang practicers treasure, cherish and guard Hua Zang Dharma, reverently entrust yourselves to the true practice and realization of Hua Zang Dharma, also practice the Six Paramita extensively to accomplish perfect wisdom. Wish all the fellow practicers and virtuous people from the ten-directions of space, take this precious opportunity, to initiate good wills to create good karma and benefit all sentient beings, to understand, cultivate and uphold the Hua Zang Dharma together.

After His Holiness Vairocana Xing Wu came out of prison on February 2010, he initiated and launched two campaigns, the "Fasting for Charity", and "A Nice Deed Each Day". Since then, His Holiness´ students all around world have built up Fasting and Charity groups spontaneously. Thousands of people have joined to practice and disseminate these two benefit actions....

1st Open Letter To Public ( after lease from prison) To all my friends who are concerned about, support, and believe in me and to those who are suspicious of, oppress, and humiliate me: My name is Wu Zeheng. I was imprisoned for eleven years and released recently. I hereby extend my sincerest g...

Mr Wu Ze Heng set up his first Microblogging on 21st Feb 2011. He promotes freedom of expression on the internet, raises the awareness of his cyber-followers, and helps them to clarify their doubts and guide their ways. He has attracted the attention of hundreds of thousands of cyber citizens and followers. ...

The Genealogical Chart of Buddhism with Hua Zang Lineage is a very precious document which made public by His Holiness Vairocana Xing Wu at the fist time in Beijing, in January 1997. Generally,the pedigree of Buddhist Documents have been fragmentary after 18th Generation of Zen Dharma Lineage, ...

Mr. Wu Ze Heng interacts with thousands of people on the internet. He clarifies their doubts and guides their ways as the Dharma wisdom he possesses is so profound and deep. He is also wise, humorous and far-sighted, and guide people right, straight to their hearts, which is just like a lamp to light up people's ...

Doctrine of “Five Positions of Monarch and Minister”

The Five Positions of Monarch and Minister is the essence of Cao Dong Dharma, the core principle leading to the correspondence of heart and self nature. It represents a deep perception of the truth of the Dharmadhatu and the realm of Forms, as well as the truth of form and formless. What are the f...